From Judge to Buttons 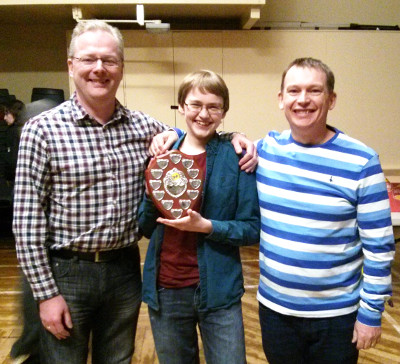 Every year Culter Theatre Club presents our "Rita Hunter Award" to someone in the club in recognition of the work they've done over the previous year.

This year the award was presented at our DVD night, and the committee decided that the deserving recipient would be Matthew Daldry for his brilliant performances, both in the youth play "Big Bad & Little Red" earlier in 2014 where he played the Judge, and also for his excellent transformation as Buttons in our annual panto, Cinderella last December.

Matthew was presented with his award by our Chairman Kerwin Robertson, and Cinderella director, Tom Forbes. Well done Matthew!

Last night Culter Theatre Club had a get together of cast and crew to celebrate the success of our most recent pantomime, Beauty and the Beast, which was enjoyed by hundreds of people over five shows just before Christmas.

As part of the evening, we also remembered Rita Hunter, who had been a member of the club for over twenty years and was a cast member in the club’s very first Pantomime, Robin Hood and his Merry Loons, playing the part of “The Fairy Queen” back in 1992.  Sadly, Rita passed away last year, but over the years she had been involved in all aspects of the theatre club, from performing on stage, creating costumes and being part of the production team, to writing scripts and directing.

Rita was always an encouragement to other club members, and a real support and mentor to many.  For that reason the club felt that one way to remember her, and to continue that encouragement she gave, would be to have an annual award in her name which celebrates some aspect of the work that a member of the club has achieved over the previous year.  This could be from any aspect of putting on a show; for particular flair on stage, superb set design or backstage work, to being a genius on the follow spot!

This year therefore, after a unanimous committee decision, I was very pleased to be able to present the Rita Hunter Award Shield to our “Star Performer”, Callum Turner (16) from Newtonhill.  Callum is one of the pupils at Camphill School Aberdeen and he has come from just watching the panto, to this time being right up there on stage doing a fantastic job with lines, singing, and dancing as one of Gustave’s Gang.  His boundless energy and enthusiasm was an encouragement to all the cast and crew, and his honesty and commitment through all the many weeks of rehearsals and the show itself was a true example to us all.  A well-deserved recipient of the Rita Hunter Award for 2012, our congratulations and best wishes from all the club go to Callum Turner.  Well done!

Jack and his Amazing Beanstalk